An introductory lesson about robots, including Arts & Bots, created by Zee Ann Poerio.

Thanks to everyone who attended our session at TRETC. We enjoyed meeting you and sharing ideas about the ARTS & BOTS program.  Thanks to everyone at CMU for your support throughout this project and special thanks to NSF for making our summer course on Educational Robotics possible.  This slide show includes the powerpoint presentation with the data from the interactive questions asked. 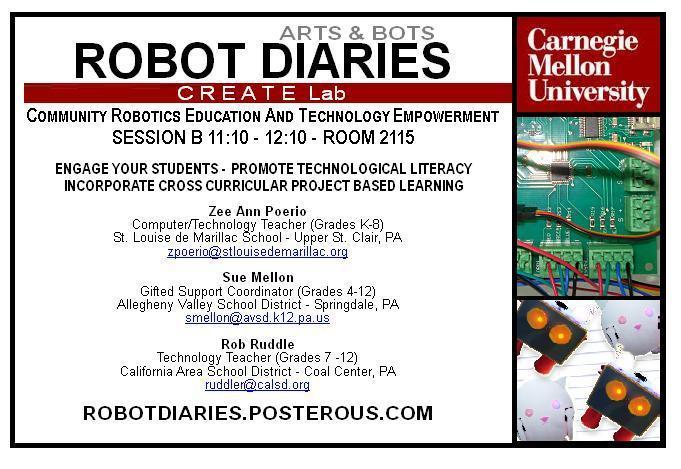 Just found this site which may be of interest to others:

In the teacher resource section, there are lesson plans including one on  measuring the capacity of a robotic arm.  Check out  the "Profiles in Curiosity" section which features famous innovators. You can also sign up for updates and register for webinars. The Thursday, November 3, 2011, Thinkers of Tomorrow webinar series at 1PM is posted as  a sesion for teachers and students with a robotics expert.

Letter of Thanks from Zee Ann Poerio

At Carnegie Mellon University,  Snake Robots have been designed and engineered to perform tasks which benefit humans in many ways.  Looking to nature for inspiration, influence, and problem solving, engineers have designed some of the robots’ movements from those of real snakes.  And new “gaits” are being developed for the snake robots beyond what mother nature intended for snake locomotion. The robotic snakes are able to move through pipes, climb poles, and even thread their way through rubble after a disaster to assist in search and rescue.  Now, smaller versions are being engineering to assist with a less invasive form of heart surgery.

My inspiration for the mini porject comes from a small snakebot that was in the lab  with a model of a human heart.  Learning that the robotic snakes were now being used in medicine reminded me of the common symbol associated with medicine - the snake entwined staff of Asclepius, Greek god of medicine and healing.

Mini-Project inspired by a visit with SNAKE ROBOTS: STAFF of ASCLEPIUS ROBOT DIARY

Student s will research snakes and using the Robot Diaries kits will create their own robotic staff of Asclepius.  Students can choose the species of snake of their choice to depict on the staff.  The robot should include two servos, and at least two lights and at least one sound effect.   The student will read his/her presentation from the point of view of the snake and coordinate the animations with their presentation which will includes the species, diet, how the snake moves, typical size and weight, and  lifespan. The snake itself should represent the snake’s true color and markings.  Additional information can include other interesting facts about snakes (not all snakes have fangs), symbolism of snakes (ex. Biblical references or snake images in ancient or modern times), a joke about snakes (What is a snake’s favorite subject?  Hiss-tory!), or a retelling of one of Aesop’s fables which include snakes.