Thanks to everyone who participated in the September 10, 2012 Arts & Bots workshop, it was a successful and inspiring evening. Participants included twenty-one educators from 10 school districts, a group from the Carnegie Science Center, and The Literary Arts Boom. They all built and programed robots inspired by the topic of library, as September is library card sign-up month. Many robots were created can be seen below.

"I enjoyed the creativity the most"

"I usually as an adult I am use to doing things I know how to do, I knew coming here that this is not in my skill set but I did something... so I do feel really good about it and it was a different experience."

"The concepts that go into building any type of robots offer really useful skills in terms of math as well has teamwork, because a lot of work with robots is how to put together different skills to make one robot" 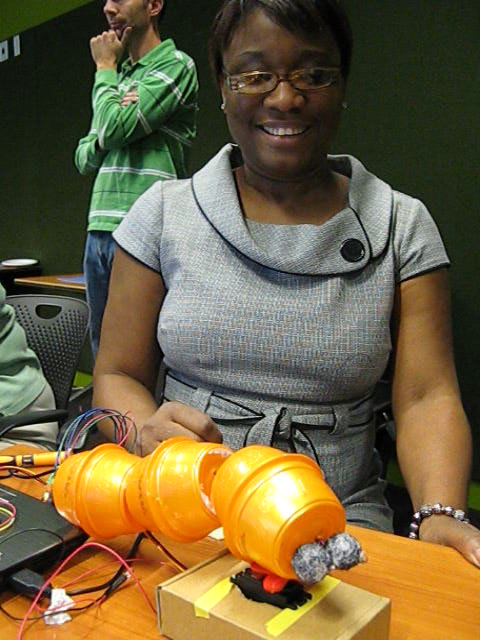 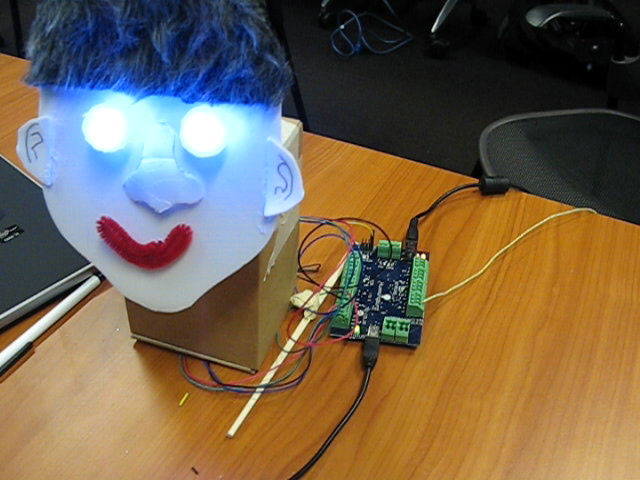 I am writing you to update you on my “Arts and Bots” experience with my 8th grade art class.  It was so helpful that I attended the “Educational Robotics for the Classroom”  course at CMU last summer, I was able to describe my experience with my students as well as having my Ringo “Beatlebot” that I built in that class, there for my students to see as I demonstrated how the robot works . My class began the robotics project late April through the month of May 2012 until the last day of school.  There were nine students, seven boys and two girls in my class. I began my introduction to robotics by defining what a robot was and the many purposes of a robot. I explained that being in an art class we would focus on a robot used for an entertainment purpose. I explained what components were included in the “robot kit” provided by CMU, including the “Hummingbird” circuit board. I also explained that the students would be using the “Visual Programmer” software to communicate the expressions and sequences used with their robot.

I instructed the students to create a robot that can make simple movements and the robot should be based on a familiar personality from popular culture. I offered the idea that my robot “Ringo” would love a reunion with his Beatle friends, Paul, George, and John and wondered if any of my students would create a new “Beatlebot”, my 12-week theme was “The Magical Mystery Tour” after all!  But no such luck, my students interests focused on famous athletes in football, hockey, and basketball. Two students Mikey and Alec went with the entertainer/radio personality Howard Stern and the musician Bob Marley. Mikey enjoyed making his Howard Stern robot so much that he requested to borrow a robot kit to create new robots with over the summer. He will update me soon on what he’s accomplished. The two girls in my class created interesting robots with Carolyn making an “Oscar the Grouch” robot and Hannah recreating herself as a girls volleyball player on the South Fayette MS team. The students began by problem solving like they would in a math and/or science class. What could they create and how would it move? This planning stage took several classes and several more when the students began to build their robots. We used materials similar to the materials used in the CMU class. Foam core, exacto knives, and glue guns were used the most! What I discovered was that adults can make robots much faster than 8th grade students! The students really took their time to make the best robot they could. The students worked well alone and collaboratively, making good use of the limited time they had. I found that the technological component (the programming activity on the computer) went faster for the students and they seemed experienced with the computers and were comfortable with that aspect of our project.

Most of students created robots they were proud of. Some students didn’t have the chance to finish everything. This project thrives with a small group of students as well as a lot of time for the creativity and ingenuity to flourish.But everyone learned something. I learned that it is possible to combine art and science and create robots in the art classroom.  It was a good experience and I thank you Clara and everyone at CMU for helping me and supporting me as I left my “comfort zone” to try something new! 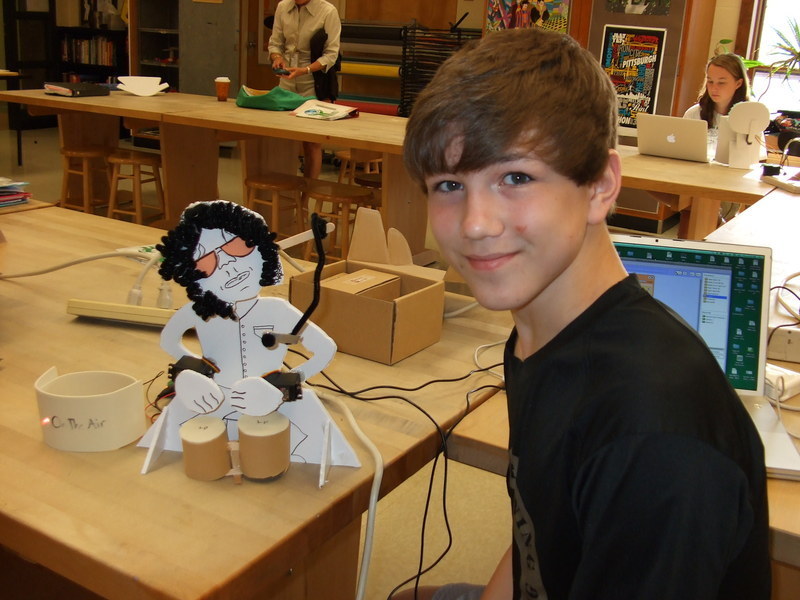 Educators talk and show off the robots they built while at a training session. They describe their challenges with the robots and possible uses for Arts & Bots in their curriculum.

Arts & Bots Introductory workshop at Intermediate Unit 1 on May 8, 2012

See on this video how Mrs. Katie Keller is planning to implement on her classroom:

Teachers and their robots: 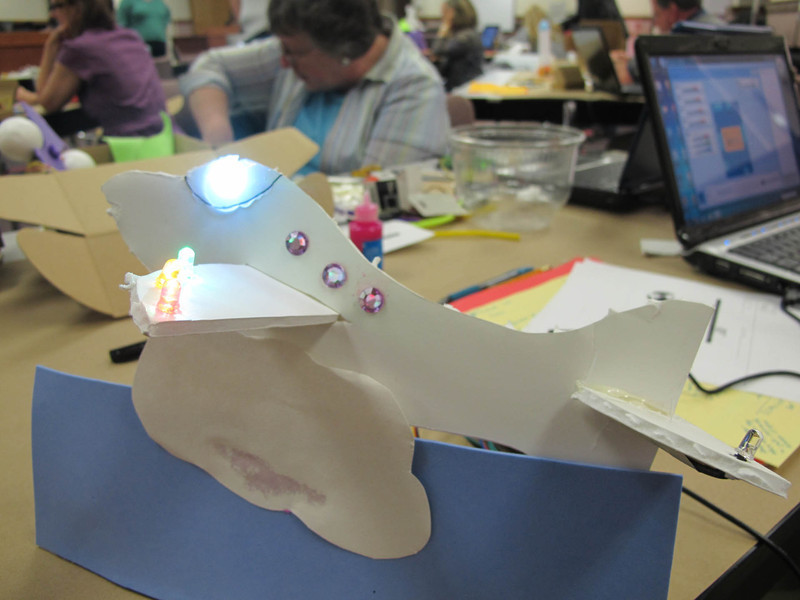 The small fish is looking for a quick snack. Little does it know, it is falling into a trap.

Erin Hopkins demostrates her elephant robot she created during the Arts & Bots workshop.

"Our world is what We make it"

Objective:  Student will develop an understanding of human interaction with the environment.  Students will explore both positive and negative impacts of human intervention.
Research - Student will research either a positive or negative effect of human involvement with the environment.  Examples include: Conservation, Lead Certification, Recycling (Positive) or Deforestation, Ozone Destruction, Water Pollution.
Action - Students will develop a basic interactive model that will change, either positively or negatively, with human presence.  Student will utilize a motion sensor to switch between two "modes" of their model; Before Humans and After Humans.
Tanner Huffman